Structural investigations on nanoparticles are typically performed either by X-ray- or neutron scattering methods. A new device now couples the two established investigation methods for nanoparticles. In future, samples will be examined using X-ray and neutron diffraction techniques simultaneously.

Official presentation of the instrument at the FAU 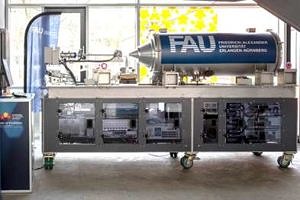 FAU researchers of the Nanomaterial characterization (Scattering Methods) group at the institute for crystallography and structural physics (ICSP) have designed and built a special x-ray machine capable of studying nanoparticles in size, shape, internal structure and arrangement. The special feature: For the first time, a device allows measuring with X-rays and neutrons simultaneously. The device, already installed at at the world’s most powerful neutron source Institut Laue-Langevin (ILL) in Grenoble, France, will provide completely new answers within the nanoparticle world. The official presentation at the FAU was celebrated in a solemn inauguration on Thursday, March 28 at 17 clock. High-ranking guests attended the event. In addition to FAU President Prof. Dr. Joachim Hornegger, Dr. Jürgen Kroseberg, Federal Ministry of Education and Research, Stefan Müller, Parliamentary Director of the CSU in Bundestag, Dr. Ing. Manfred Wolter, Bavarian Ministry of Economic Affairs, Regional Development and Energy as well as Prof. Dr. med. Helmut Schober, Director of the ILL and speaker at the same time, joined the ceremonial act. Prof. Dr. Christoph Brabec from the Department of Materials Science (Materials in Electronics and Energy Technology) and Director of the Helmholtz Institute Erlangen-Nürnberg (Hi-Ern) as well as Jens Hauch, HI ERN, underlined the importance of large-scale equipment research for materials research at the FAU in a short talk.

Over the recent two and a half years, the research team of Prof. Dr. Unruh, Professor of Nanomaterial Characterization (Scattering Methods), worked on the device as part of a project funded by the Federal Ministry of Education and Research. Using small-angle X-ray scattering (SAXS), the instrument makes the invisible visible. Small angle scattering is a preferred investigation method in many areas of applied science. From the angular and intensity dependence of the deflection of the radiation, researchers can conclude the connection between the microscopic structure and the properties of materials such as hardness, melting behavior, catalytic activity and absorption of light. For example, the porosity of catalyst materials can be determined, the investigation of the relationship between the structure and bioavailability of new drugs becomes possible or the functioning of DNA structures can be explored by SAXS measurements.

Two in One: the combination of two well established methods 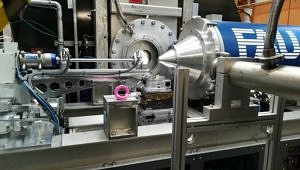 Unique to the newly developed device is the idea of combining the instrument with another measuring method, the so-called neutron small-angle scattering (SANS). SANS delivers partly complementary information content. Probably the world’s best neutron small angle instrument is currently located at the ILL research reactor in Grenoble. The SAXS instrument became already a part of the D22 SANS beamline to be permanently available for combined X-ray and neutron small-angle measurements. 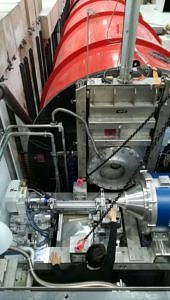 The two different types of radiation – X-ray and neutron beams – are used because they interact with different parts of the material. If our eyes still had an “x-ray vision” in addition to our normal vision, we would continue to recognize the outer shape and color of objects. The X-ray view would also reveal a glimpse into the inner life of the objects. The same counts on X-ray and neutron investigations. The former are particularly well suited to detect heavy (inorganic) matter such as metals, oxides and minerals – including, for example, bones – while the latter are particularly good at visualizing organic matter such as plant cell components, surfactants in detergents or modern pharmaceuticals.

Development of ecological, affordable and durable solar cells and displays

The combination of both techniques allows the study of complex structures at the nano-level. So far, experiments of this kind had to be carried out separately in time and space. The new instrument will be the first of its kind to enable simultaneous measurements on a sample with X-ray and neutron small-angle scattering. Thus, the “X-ray view” allows the observation of so-called quantum dot formation as they are used for example in modern solar cells and simultaneously the occupancy of these small particles with dye molecules can be examined with the “neutron view”. Solely in this way, complex manufacturing processes essential for development of ecological, low-cost and long-lasting solar cells and displays of tomorrow, can be completely decoded and optimally optimized.